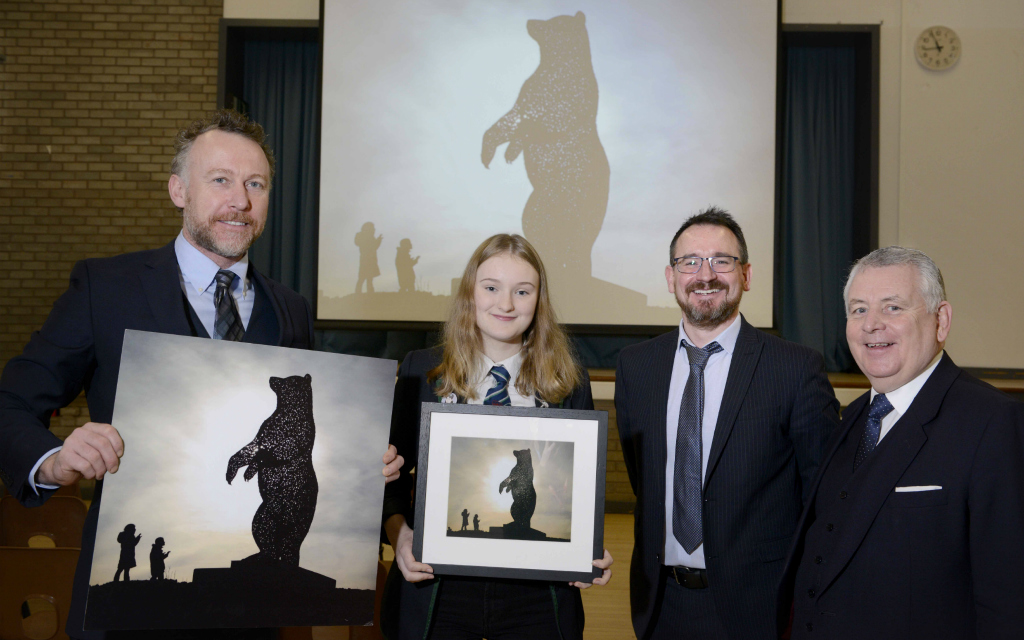 A pupil from Dunbar school has won the competition to name the sculpture of the bear, which forms part of the mixed-use Hallhill Development at Dunbar in East Lothian.

The bear is a five-metre high steel sculpture created by renowned Scottish artist Andy Scott (also behind the much loved ‘Kelpies’).

Emily Hotchkiss, from S5 at Dunbar Grammar School, was awarded the prize after her bear name “The DunBear” was chosen.  One of Emily’s prizes was a picture of the bear signed by Andy.

Following the recent unveiling of the Dunbar bear in November, a competition was held with students from Belhaven Hill School, Dunbar Primary and Grammar to name the bear. The winner was chosen from nearly 3,000 entries.

The Dunbar bear sculpture, located off the A1 in close proximity to the Spott Roundabout at Dunbar, represents the legacy of one of East Lothian’s most famous sons, John Muir.

John Muir, born in Dunbar in 1838, played a key role in the development of America’s national parks. He emigrated from Scotland in 1849 and is famous for petitioning the U.S. Congress for the National Park bill, establishing Yosemite National Park. The bear is symbolic of John Muir’s travels through the far-off wilderness of America’s west, in the Rockies and his advocacy for National Parks.

The sculpture forms part of the mixed-use Hallhill development, which started on site in 1999. It has already delivered sports facilities, 56 acres of community woodland together with 1,200 homes including over 200 affordable family homes with approximately 320 currently under development, as well as school provision and commercial and retail outlets.

“The DunBear” took the prize after students from Belhaven Hill School, Dunbar Primary and Grammar entered their own names to the competition. The top 10 names from each school were then selected by the head teacher and passed onto the prefects of the school to narrow down the selection.

The final name was chosen by Andy Scott and stakeholders from Hallhill Development, who commissioned the piece.

“I’m absolutely thrilled and would like to congratulate Emily Hotchkiss on her name for the bear. Every entry represented real enthusiasm for the project and, at the end of the day, community, history and talent is what this unveiling has been about.

“The DunBear celebrates the incredible legacy left behind by John Muir. His advocacy for national parks and the environment in general is a lesson to us all that we must do what we can to protect our precious environment.

A graduate of Glasgow School of Art in 1986, Andy has completed over 70 projects across a wide range of disciplines across the UK and internationally. Andy works to commission. His distinctive hand-crafted figurative sculptures combine traditional dexterity with contemporary fabrication techniques, and range in scale from 3 to 30 metres in height. He works in steel and bronze, with his inspiration firmly rooted in the figurative genre.

He works with regular teams of structural engineers, fabricators, haulage & crane operators, lighting designers and a host of other specialist professionals to create striking landmark artworks.

Andy and his projects have been the recipients of many awards and accolades. He has received Honorary Doctorates from Strathclyde University, Edinburgh University, Glasgow Caledonian University and The Open University. He is an Honorary Fellow of the Royal Incorporation of Architects in Scotland, an Honorary Fellow of the Scottish Society of Architectural Artists and has been awarded by the Illinois St. Andrew’s Society, The American Scottish Foundation in New York and The National Trust for Scotland USA.

The Kelpies sculptures have won a Saltire Award for Civil Engineering, UK Structural Steel Award, National Landmark of the Year by BBC, and were recognised as a “National Treasure” by the UK National Lottery. They have also been adopted by UKTI as a symbol of Great Britain for their 2014 campaign in China and by Visit Scotland for their new international campaign 2016.

Since commencing in 1999 the Hallhill landholding has delivered around 1,200 houses, with approximately 320 currently under development.

Other elements include an Asda supermarket, garden centre, hotel and pub/restaurant and McDonald’s restaurant.

Woodland has been transferred by the developer to the local community woodland Trust, with land transferred to East Lothian Council for the new primary school. Land has also been provided for the Healthy Living Centre and sports pitches.

Economist Tony Mackay produced an economic impact assessment in 2016 which concluded that existing and future Hallhill developments will contribute almost £30 million per annum to the East Lothian economy and to date have generated over 600 jobs.